Recently Indian media was filled with Devyani Khobragade case and there were diplomatic raw in between India and USA. But as an Indian and a neutral thinking person I could not understand why Indian Government is mingling with another country’s justice and law.

The law of the land should be upheld and diplomatic protection does not mean that the diplomats can do whatever crime they want to do. Indian Government should take action against Sri lanka for torturing Tamil fisherman and other middle east countries like Saudi Arabia, for making Indian citizens to work like slaves, instead of trying to protect the criminals like Devyani Khobragade, who has forged visa documents and exploited a poor Indian maid.

Those scam tainted ministers of Manmohan singh is not having common sense to think the after affects of this mess, they are making in the name of Indian pride. They are risking the prospects of millions of Indian workers in USA, and billions of US Dollars they are sending to India. Then what about the trade links with USA??. Those bunch of idiots should not forget that when China attacked India, there was only the USA to help us. Still China is sitting at our border, eyeing at our Arunachal pradesh and other areas. I am sure that the day US is estranged from us, China will grab it.

Why did Devyani Khobragade forged Visa documents, which is very sensitive and important for the security of any country?? Why did, She tried to cheat her house maid?  Why should the Indian Govt protect her by using taxpayers money?

Is Sangeeta Richard is not Indian citizen?? Does she is not having any privilege?. Why Indian Government is protecting a criminal, and not supporting the victim(Sangeeta Richard)

I would like to bring the following points to your consideration.

Why Devyani Khobragade was arrested

Devyani Khobragade had made forgery papers to obtain VISA to her servant. As per US law there is a minimum wages for each trade. But she was giving her house maid very low wages than the minimum wages. 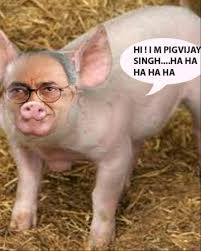 In India she can do all those illegal activities and forgery, since she is having lot of influence in the government. We know that, if Rahul Gandhi makes a speeding offence, no police man have the guts to fine him. We also knows that our pig vijay singh is travelling in a car fitted with red beacon light. He is not holding any governmental post and not allowed keep red beacon light on his car. But police are not dared to arrest him.

But in the USA the situation is different. Even if Obama speeds his personal vehicle, police will issue a speeding fine.  I was closely following the last two us elections. The us media is checking the past history of all presidential candidates. They check is any candidate had forged papers to get his first home loan, while he was young. They are also checking, if any candidate influenced the  bank through their friends and relatives to arrange any loan. I am sure that, we Indians will not understand the way the system works in transparent and non corrupt countries.

Suresh Kalmadi and his friends made all of us buffoons in  front of the world by siphoning millions of dollars through commonwealth scam. Raja is taken crores and crores of rupees, and even judges says they could not count the zeros in scam amount. Still they are ruling us. That is our fate. But please do not try to implement this system to other people

As per me she must be arrested, trialed and should be given the maximum punishment, as per the law. This case should be an example to other Indian elites who is trying to misuse the system. Indian Government should not involve in this matter

Devyani Khobragade What Next

She should be arrested and trialed in india (after releasing her from USA) for other scams she and her father done in India. Like Adarsh flat scam etc etc